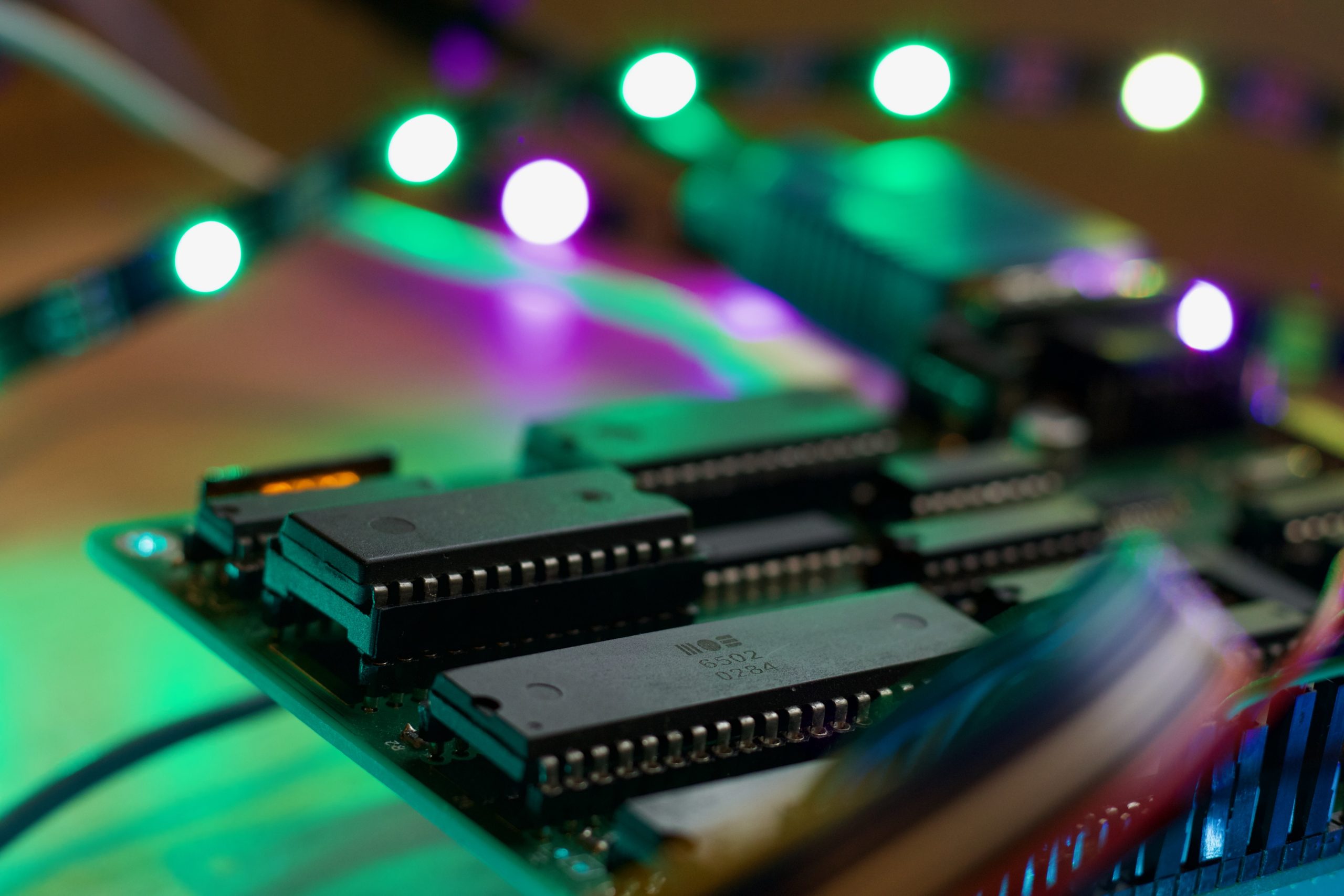 The problem with WS2812B’s on a slow CPU

When even the co-author of the FastLED library, Mark Kriegsmann, says it’s can’t be done, you know it’s not going to be easy. “The CPU would need to be at least 20X faster to support them[WS2811 based LED’s], and it isn’t.  For that you want an Arduino or Teensy[…]”, as he puts it.

That looks easy right? Just toggle a pin at the right interval and it works, right? Well – it is, if you’ve got a fast enough processor. Looking at the numbers though, there isn’t enough time to do much toggling when running at 1 or 2Mhz – let alone varying the periods.

At the very “slowest” the high+low period must be 1.825 microseconds, or just about 500khz minimum. Maybe it’s possible to toggle a 6502 pin at 500khz, but it certainly isn’t possible to squeeze NOP’s in there to vary the period or do any kind of processing to change colors. So maybe Mark is right and you actually do need a faster processor?

Luckily it turns out, this isn’t the case. The 6502 is perfectly capable of controlling a string of WS2812B’s, a.k.a. Neopixels. Just like everything else you might want to interface the 6502 to though — the RGB LED’s need a little bit of help.

To be fair, this does mean running the 6502 at 2Mhz(Note: Not 8 Mhz), which would be slightly problematic for the Apple II, but perfectly doable for many or most other 6502 based computers.

As luck would have it, my own 6502 single board computer has an 8 Mhz clock output available and is already running happily at 2 Mhz, which takes the hard work out interfacing with the LED’s – only two extra IC’s needed.

The circuit takes a shift clock and serial data from the 6522 shift register. CB1 is the clock and CB2 is the shifted data. CB1 is normally high until it starts clocking out data, which keeps the ~CE(chip enable, active low) pin high through R2. When CB1 goes low the first time, C2 immediately discharges through D1 (I used a 4148) and ~CE is activated. This arrangement keeps the shift register active while data is shifted.

At the same time the signal from CB1 is also fed through the U1A inverter, a simple RC filter, and another inverter, giving the ~PL(load register pin) the short negative pulse needed to latch the data being clocked out from the 6522 shift register. If the pulse is too long, we miss the first bit.

Now we get to where the magic happens – the serial binary data is converted to WS2812-style PWM data. Since D7 is always high and D0-D4 is always low, this varies the high period of the signal by putting the data on pins D5 and D6.

The latched data is then clocked out to Q7 at the rate of 8 Mhz, fed to the CP pin and this is then fed directly to the WS2812B data pin. This means the 6522 supplies data at a comfortable rate of 1 Mhz and the 74HC165 shifts out the converted data at 8 Mhz, which means the bit rate is right around 1bit per microsecond. As you can see this is well within the 1.25us+-600ns in the datasheet.

We’re actually closer to going too fast than too slow, but halving the clocks to 500KHz and 4 Mhz would make it 2 microseconds pr bit – out of spec that says max 1.825 microseconds.
Maybe – just maybe – this could actually work on an Apple II since it has a slightly higher clock than 1Mhz @ 1.023Mhz, but you would then need to make a 4x frequency multiplier for the shift register CP to match input and output.

But wait… 3/8 is only 375ns, right? That would be a 0 signal, right? And 1/8 is only 125ns? Well – in my case I seem to have either stray capacitance on Q7 or something else messing with the timing – somehow using more than two pins for the data gives me a T1H period way longer than what we’re aiming for here – essentially making every bit a 1. Maybe a pulldown resistor on Q7 would make things more consistent – either way I chose to leave things the way they are simply because they work.

The code below is a simplified modification to the current state of my 6502 firmware – my favorite compiler for the 6502 is cc65. Since I’m not sure I’ll merge the change, I’m leaving it here for now – untested, but contains everything needed to get it working. Assume a CC BY-NC license for now.

Sending a color to an LED on the string is as simple as just sending them in the right order with a delay that’s long enough to make sure the 6522 shift register finished shifting before sending another byte – the WS2812B expects colors in GRB order. 24 bits in total per LED.

When we’re done putting colors on the LED string, all that’s left to do is just to wait 50 microseconds, so the string latches the data (updates).

Essentially this means we have 100 clock cycles (at 2 Mhz) available to manipulate LED data even while we’re sending pixels. As long as we’re sending the next 24 bit LED data before the 50 microseconds have passed, we can keep using time between LED’s for as many LED’s as we need.

100 clock cycles is more than enough to rainbow the LED’s and most other simple processing.

As you can see, the 6502 is perfectly capable of rainbowing a string of individually addressable RGB LED’s – it even has time to spare. Previously I’ve managed to run one of these LED strips at 4 Mhz(out of spec though), but I’m happy to report it’s possible to go even lower with this approach.
In a pinch you could use the same trick with an Arduino at lower clock speeds – all you would need is a second ‘165 shift register to have the Arduino output a whole port at the same time ( PORTA = RED; NOP x 7 etc.)

What do you think? Cool experiment or waste of time? I’d appreciate a comment here or on Youtube.