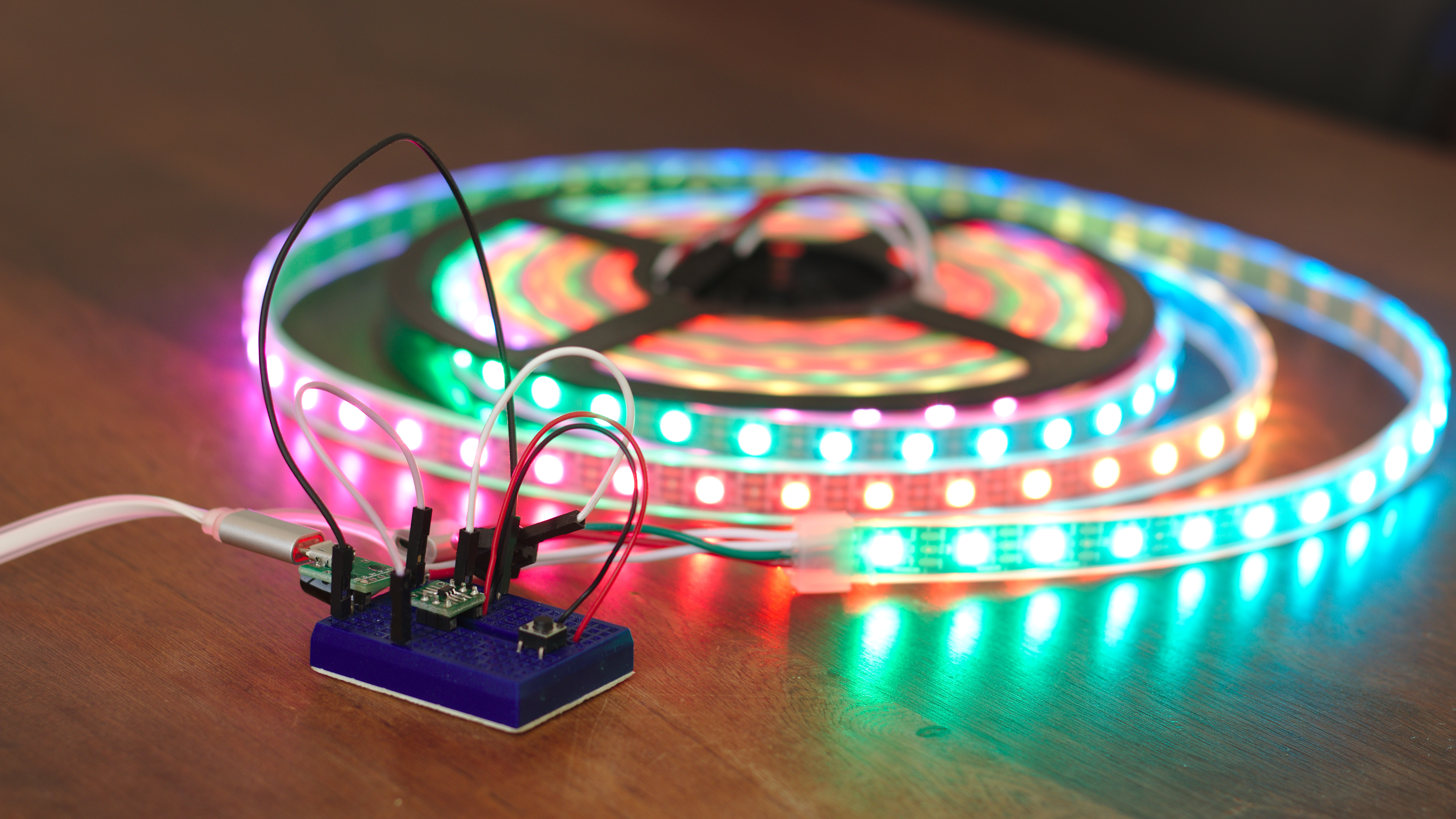 Even though it has it’s limitations, there’s actually a lot you can do just by bitbanging with an 8Mhz microcontroller. As you can see in the screenshot from the IDE below, it’s actually meant to work with a bunch of peripherals – even though there is no hardware support for any of it.

Of course there’s a couple of very smart people over on the EEVBlog forum working hard at making an open toolchain for these chips, but I decided I couldn’t wait to get started and stuck with the manufacturer IDE, ICE and programmer.

To get the most out of the tools at hand, the IDE seems to expect you to use a mix of plain C, macros and assembly instructions, all mushed together in some pretty interestingly looking code. I’m probably not going to be popular for saying this but it actually feels very intuitive when you get used to it. It’s weird, but it’s “fun”.

After my initial mandatory “blinky tests” I decided to try something slightly more useful – controlling a WS2812B LED. Since the protocol itself relies on bitbanging with pretty tight timings, I figured this was a good test.

Before we move on, here’s the spoiler! Success:

But how? Adafruit’s Arduino-library uses 3 bytes of RAM for every LED so how do you run 300 with just 64 bytes of RAM?

Turns out there’s a simple solution to this problem: Don’t put every LED in RAM.
Since the timings of the WS2812B’s aren’t that tight, there’s actually room for a lot of spare cycles between sending the 24bit value for each LED. Basically just do the logic on the fly, instead of storing each LED in RAM. The only downside is you can’t just change a single LED value and leave the rest.

The logic for controlling the LED’s is pretty simple once you wrap your head around it. Send 24 bits for each LED and end with a delay long enough to make the data latch. In this case, keep each bit around 1.25uS, a “0” is a short high, followed by a “long” low and a “1” is a long high followed by a short low. So simply: High->Low 24 times. Long high for 1, short high for 0.
Here’s a snippet from the datasheet:

Tim “cpldcpu” wrote a detailed post about it back in 2014 but either things changed since or he got the details wrong, because in my tests a RES signal needed to be at least 50uS and when experiencing glitches, the longer the reset signal, the better.
I have a feeling I would’ve never done this project if I hadn’t seen Big Josh’s post about how simple the protocol actually is but sadly his code needed some serious manipulation to port to the Padauk IDE, so I ended up rewriting it completely from scratch with the WorldSemi datasheet in hand and a vague memory of what BigJosh did with it.
A big thank you for the inspiration to both Tim and BigJosh!

So.. What about the code?

Below is the minimum code I use to talk to the string of LED’s. There’s room for optimisation and I’m sure a bunch of it looks funny, if you’re used to seeing a plain C project on an AVR. First of all, the Padauk IDE is a little bit fuzzy when it comes to data types. There’s no such thing as a “long” and it seems to me all types are unsigned by default – though I haven’t researched this thoroughly.
The only data types available in the Padauk IDE are:

The handy thing about the types though, is that the individual bits and bytes can be accessed by macros, without any fuzzing about with shifting them around.

Also, the builtin macros come very handy. See the below code. All the code needed to control the WS2812B’s are contained in the macros “send1”, “send0” and the function SendRGB();

The SendRGB() function is a prime example of Padauk IDE weirdness, containing both assembly instructions, macros and plain old C. But what can I say: It works. I probably could’ve shifted the rgb EWORD x in a while loop(more efficiently than the 24 macro if’s) but I decided to try out the macro and it was more than efficient enough for this purpose. The rest of the code(which I haven’t included here) is basic manipulation of the r,g & b values followed by a show(); to set the right colors.

After popular demand, the complete source is available here:
https://github.com/AndersBNielsen/pms150c-projects

So.. Why would I choose this instead of a major brand MCU?

Obviously, the major selling point of this microcontroller is the price. At 3 cents each it’s ten times cheaper than the Pic equivalent(at 3000 MOQ) – the pic10f200(34 cents) or the ATTiny10(28 cents @ 4500 MOQ). //Digikey
Also, the customer service is far from bad – I got an email reply from Padauk within 12 hours.
The downside for the PMS150c is the OTP nature, the limited instruction set, and the sometimes curious and seemingly random IDE documentation – only partially translated into English. (Getting better with every release though from 0.84 to 0.86)
If you’re thinking about making a toy with an ATTiny10 in it and it doesn’t need to do a lot of heavy math – this might be able to do the same job for a tenth of the cost. That doesn’t mean I would be happy to see it in a pacemaker.

What else can it do?

My guess is: More than you’d think. I have a feeling my next project might involve controlling the SI24R01 2.4Ghz radio module or maybe a budget Raspberry Pi module.

Either way, please tell me what you think, point out my mistakes and let me know in a comment what you’d like to see me do with this thing in the future.